Cracking the Mystery of Hometown History

“Those who do not study history are doomed to repeat it.” Georges Santayana

History is made every day. Scholars say that teaching children about history has many important benefits, including providing a sense of identity, helping to improve decision and judgment skills, and learning from the mistakes of those in the past. History provides a context from which to understand others and ourselves. For six students in the District 62 Central School Children of High Intellectual Potential (CHIP) Program, the study of the history of their hometown has allowed them to time travel through the ages to better appreciate and understand the evolution of Des Plaines.

In December of 2013, Leigh Radnitzer, Library Media Center Specialist and CHIPs Instructor, offered her six students the choice of ecology or history as the subject of their next Problem Based Learning Project. Inspired by a visit by State Representative Martin J. Moylan, who talked about his own youth experiences, the students, Rohan Balchandani, Eleanor Bechtold, Cory Cordier, Nell Jakoniuk, Emily Kulaga, and Rose Kurutz, unanimously chose history. “The goals of Problem Based Learning are to help the students develop flexible knowledge, effective problem solving skills, self-directed learning, and effective collaboration skills,” said Radnitzer. “Working in groups, students identify what they already know, what they need to know, and how and where to access new information that may lead to resolution of the problem.”

In a collection of brain storming sessions, the students determined the process for researching the information and then educating their classmates and the community about their findings. One of the first problems to be solved was how to disseminate the information. Kurutz, a dancer with the Des Plaines in-house dance company, Artistry in Motion, suggested that the historical facts the students collected could be “stuffed” into the plastic Easter eggs set out at the annual Des Plaines Park District Easter Egg Hunt. They contacted Cindy Yelich, Special Events Supervisor and coordinator of the event, who agreed to collaborate with the students on the project. Yelich presented a tutorial on the development, financing, marketing, and implementation of Park District programming. “This project has provided the Central School students with an opportunity to practice college-level research and literacy skills, while also pursuing a local topic of interest,” said Yelich.

The students also visited the Des Plaines History Center for a PowerPoint presentation on the Native American tribes that inhabited early Des Plaines, the importance of railroads to the then agrarian community, and the development of businesses and pre-fabricated housing developments. They toured the Kinder House for a walk back in time to the early 19th century, all the while collecting facts to be used for their project. “Extending the walls of the classroom into the surrounding community has allowed our students to engage in real life learning,” said Radnitzer. “I think it is important that children have a knowledge of where they come from.”

A field trip to meet with Reverend Dr. William G. Grice III, in his museum-style home, taught the students how experiences become memories and, therefore, become a part of our history. He talked about his own family’s historical roots in Des Plaines, and showed them artifacts, receipts, deeds, permits, records, photographs, and a diary kept by his Aunt Savena Ahbe Gorsline, the first Miss Des Plaines. In addition, the students used books and online sources to gather approximately one hundred facts; seventy of which were typed, printed, and stuffed into five hundred of the plastic Easter Eggs.

On Saturday, April 19, the fact-filled eggs were mixed in with the other eggs filled with toys and treats. The students distributed them at the free egg hunts for ages 7-9; ages 10-13; and adults in Prairie Lakes Park. On the back of each printed fact was a two-for-one coupon for the miniature golf course at Mountain View Adventure Center. “Many hundreds of residents participate in the annual Easter Egg Hunt, which provided the students with a captive audience,” Yelich said. “We have already had one coupon turned in, making this method of getting the word out about the history of Des Plaines very effective.” “We enjoyed working with Central School on this program,” added Yelich,” and we look forward to working with other District 62 schools on community collaboration projects.”

Bruce Springsteen sang, “Son, take a good look around. This is your hometown.” In a final interview with the students, during the stuffing phase of the project, each student put forth their favorite historical fact about their hometown. They are:

Eleanor Bechtold: Des Plaines was once known as the City of Roses because of all the greenhouses.

Cory Cordier: The Choo Choo Restaurant, originally owned by the Ballowe family, opened in 1951 and served food on a model train at the counter.

Rose Kurutz: My great-grandfather, William Shorts, was the first Des Plaines policeman to die in the line of duty in 1927. 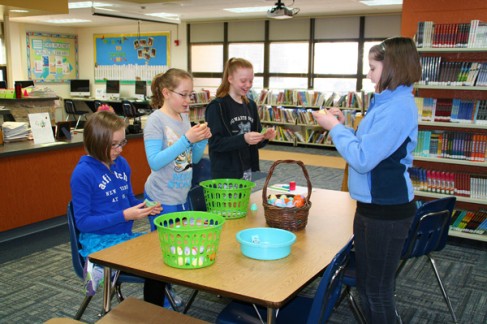 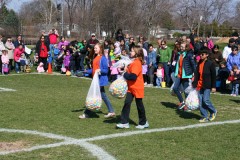 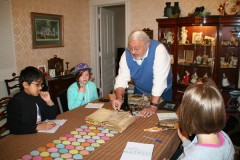 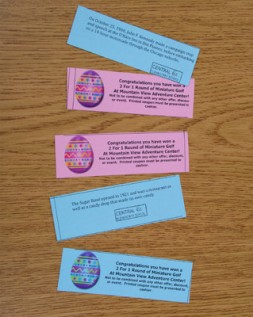 An example of the kinds of historical facts that the Central School CHIPs students researched for their Problem Based Learning History project. 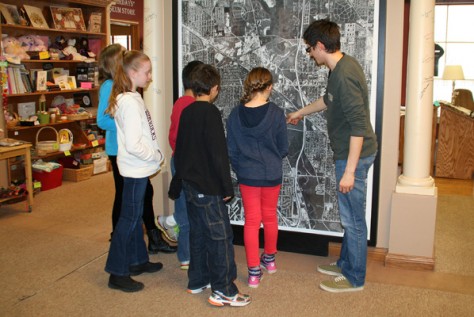 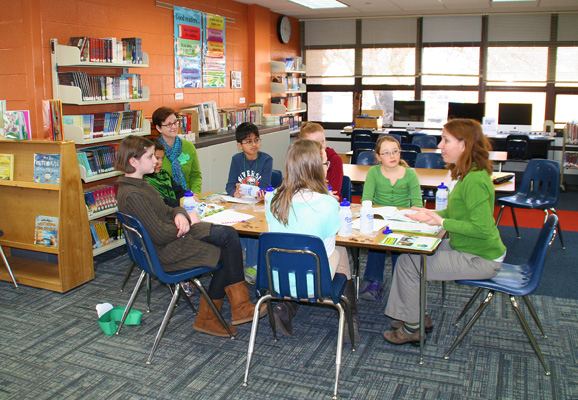